Right now, Holden & I are watching an Arashi video in which our namesake makes an impromptu haiku summing up his experience at the very end. Thus, I was inspired to write our band's mission statement in haiku form.

Nino Blankenship
Is a band we made for lulz
I like pecan pie
Posted by Sylvia at 6:01 PM No comments:

Welcome to the room

...a new addition to the drumkit! Posted by holden at 4:46 AM No comments:

Sometimes, the most beautiful things...

Saw this clip today on Youtube and thought it'd be worth sharing since today's a scheduled band practice day. :D

Posted by holden at 4:44 PM No comments:

Where I want to be Posted by holden at 1:33 AM No comments:

Though I started playing piano way before I got into percussion, I still view myself as a much better drummer than pianist. Maybe with time (and with playing drums much less for several years due to living circumstances), that perception no longer resembles reality...

...but I still have an affinity for the throne. With both Sylvia and I taking turns at the set, at least one of my goals for this project has been achieved: participating in a group in which a drummer's perspective is not only appreciated, but actually critical to the underpinnings of the band!

And now, a not-so-exhaustive list of my influences on the kit:

Keith Moon. The one member of The Who least grounded by reality, but most driven by instinct. Maybe fills every two measures represents a rather excessive, showy approach to drums, maybe it does. Maybe it also happens to be, at the heart, what I'd like to do every once in a while: drumming at its most unfettered.

It doesn't work with every song though and that's where everyone else comes in...

Oh, Genesis's Phil Collins. More known these days for sappy soundtrack songs that beat out Aimee Mann at the Grammys, the king of mainstream 80s music mixed decent chops with tastefulness and groove, along with his well-known introduction (with an assist by Peter Gabriel) of the noise-gated drum sound that dominated the era.

The opening to "Behind the Lines" (off of 1980's Duke) exemplifies Phil's ability to naturally stay aligned with unusual transitions and time signatures, while the massive radio hit of 1983, "That's All," speaks to his skill at finding the heart of a groove and sticking with it throughout. 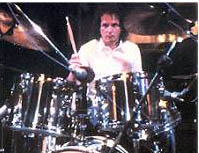 Way more obscure than the above two, but still part of a major recording group - Dennis Bryon, who played with the Bee Gees from 1975-1980 during their most successful period. Everyone's heard "Stayin' Alive" (a drumloop based on his work on Night Fever) but his two most defining moments in the pocket have to be "You Stepped Into My Life" (from the 1976 Children of the World album) and "Love You Inside Out" (from 1979's Spirits Having Flown). Absolutely on point with both tracks!

A little bit looser in approach, but nonetheless still very tasteful, is Billy Joel's former drummer Liberty DeVitto, who played on every studio album from Turnstiles to River of Dreams. Big snare sound, a slight behind-the-beat tendency, and a love of fast end-of-section tom fills (i.e. "Pressure") really contributed to the distinctive arrangements Billy had during his peak.

In comparison, I saw Billy live in 2008 - with his current drummer at the kit - and could tell the difference. Liberty's snare always managed to impart a bit of personality into the proceedings; his replacement on the other hand continues to sound as anonymous as ever, and it makes the experience less engaging as a whole.

Soundgarden's Matt Cameron to me represents the most talented and accomplished percussionist of the grunge era - even if I want to forget his work with Chad Kroeger as much as possible! But "Black Hole Sun," "Fell On Black Days," "My Wave" - all a mixture of technical ease (especially when time signatures got strange) and a compellingly dark, foreboding tone from his equipment. Even the last Soundgarden album, Down on the Upside, recorded while the band was falling apart...still provides plenty of evidence that Matt had not lost his sense of feel.
Posted by holden at 5:04 PM No comments:

What a difference a decade (and a half, give or take!) makes Hello! This is Sylvia, the better other half of the band. My real name is Joanne (and even that isn't my actual first name), but I chose Sylvia as a nickname in middle school after finally growing sick of being confused with Joan (pronounced jone), Joan (pronounced jo-ann), and Joanna at school, and Joan (pronounced jone) and Janice at church. I could have used a shortened version of my first name, but there were people both at school and church who had that name too, whereas I'd never met a Sylvia my age.

But enough ruminating about nomenclature; I'm a childhood friend of Chris' (and also responsible for his nickname, Holden - wait, I said no more ruminating about nomenclature!) and we basically grew up as the church misfits. We grew apart eventually (college, etc.) until last year when we met up for pasta in North Beach and began meeting up for food (and usually - on my end - drinks) and then at some point we started meeting weekly and conversing about anything and everything but usually existential suburban twentysomething angst. From those conversations we decided to start a performing arts project - originally a comedic cabaret of sorts - and after my best friend suggested to Holden that he do something with his musical interests, we decided on doing a one-off concert.

One day, I showed Holden a picture of the actor/singer/songwriter/musician/Japanese pop idol/eternal-17-year-old Kazunari "Nino" Nimomiya dressed in Japanese period costume for his film Ooku, which Holden pointed out looked like the costumes worn by Kenny Blankenship, the host of the show Takeshi's Castle Most Extreme Elimination Challenge because of the pointed shoulders.

Oh, and I also happen to sing and play three instrument families (percussion, guitars and keyboards/piano) which is why I am in the band. Well, other than my debilitating existential angst/failed romantic relationships/commitment-juggling burnout/spoiled-only-child insecurity/general quarter-life crisis issues that inspire Holden to write songs for the band, of course.
Posted by Sylvia at 11:57 PM 1 comment:

The waiting...is the hardest part

I was in two high school musicals as a drummer, which is how I befriended Glee's Darren Criss way before anyone knew who he was.

I did two talent shows at said learning institution as well, playing for three different projects.

I attempted to participate in several other different bands that never actually performed - one that ultimately morphed into the high school group known as The Polygons, and another with another set of friends, one of who is now playing bass for a band out in the North Bay.

And now all these years later I'm actually finally starting something where I have some say in this process. It feels great to be at this point. Surreal, actually, because there've been many times where I wondered if my skills on the set and on keys would ultimately just sit there and go nowhere.

Through circumstance and serendipity, at least one of my creative dreams is about to be fulfilled. Not sure yet how it'll feel, only that this is hopefully going to be the start of something great.
Posted by holden at 4:13 PM No comments:

Not the first day of this journey. Right?

But really, starting this blog/site is the culmination of ten years of waiting and several months of inspiration. (Sometimes I wish the order was the other way around, but I digress).

I'm actually starting a band for once, after all the years of talking about this.

This is kinda cool.

And soon I will be putting up walls of text thicker than the ones next to a freeway. Beautiful.
Posted by holden at 12:14 PM No comments: